Zen BMP II IMS has been developed to meet the training requirements of gunners and Commanders of Infantry Combat Vehicle (ICV)/Armoured Personnel Carrier (APC). It trains recruits and hones the skills of trained gunners in handling and firing different types of weapon systems.

It replicates the ergonomics of gunner and Commander cabins. It has the same controls, indicators, viewing devices and instrument panels of the BMP II APC. The simulator trains the crew in smooth, efficient and effective handling of weapon systems thus reducing risk of accidents. The simulator reduces heavy expenditure on ammunition, fuel and logistics.

The physical conditions in the ICV for missile operation are simulated. Gunners experience the same sort of discomfort they face during missile operation since the driver’s cabin is no different from the original vehicle’s cabin.

Off-line, the computer calculates the errors made by trainees during drills and exercises. At the end of the firing session, the performance evaluation report can be generated. The training is realistic and as close to actual as possible.

Provide us with your details for product brochure and virtual demo. 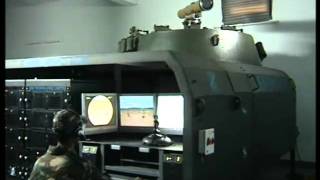