Zen Smart Target System (LOMAH™) is an electro-mechanical, software-driven, acoustical projectile detection and reporting system designed to be used at outdoor ranges for live Small Arms firing. The equipment is rugged, light-weight, easy to assemble and operate. It is available in wired and wireless configurations. The system can be operated with 230V AC 50 Hz or with DC battery power.

Actions associated with day and night firing, such as, time taken for erecting targets, physical movement to check results and repair the targets, crossfire and safety-related issues, are all addressed by ZEN STS ®.

LOMAH™ consists of a Pop-up Target (PT) with acoustical sensors mounted on a frame at the Target End, Firing Point Equipment (FPE) for individual lanes at the Firer’s End for instant display of location of bullet hit and a central Master Control Station (MCS) to monitor and record the results of all firing lanes.

FPE displays and records the shot location on the target and miss location within the detection zone, number of shots fired, type of exercise in progress, the size of the group of bullets, the score, rating and the lane operation status. These features help impart real-time instructional and corrective measures to the firers.

The immediate recording of results in the MCS database can be accessed at any time later thus eliminating the time consuming and laborious process of manually recording details. The firing exercises and exposure time of the targets can be set from FPE as well as MCS.

It is a Location of Miss and Hit (LOMAH™) system

Provide us with your details for product brochure and virtual demo. 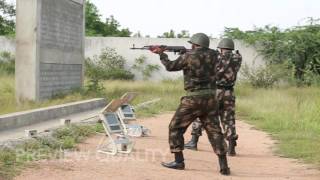